Skip to content
Various Forms Of Divorce In Africa. 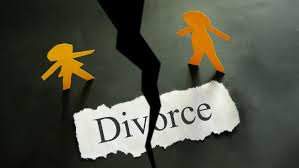 After a thorough research and careful studying of what happens in Marriage here in Africa especially in Nigeria, I have arrived at the conclusion that we have 7 Basic Forms Of Divorce in Africa Here are they:1. Voluntary or Walk-Away Divorce: the woman wakes up one day pickup all of her belonging and checkout of her matrimonial home and never return back.
CAUSES:
> Maltreatment: The man has probably turn her into a punching bag or has made life extremely unbearable for her.
> Lack Of Money: The man lost his Job, has problem with his business or the man found himself in a financial mess and can’t cope any more with his family’s basic financial need.
> sickness/ Diseases or Physical Challenge: maybe the man lost his eyes, legs or hand (or paralysis)to accident of any sort or he developed a thermal illness and the woman can’t cope with it anymore.
> Friends/Fun: the woman probably has associated herself with bad friends (cult or women without husband) and they told her its slavery to be under a man or She has gotten herself a sugar Boy/Daddy or even the both and decides her husband is doing nothing for her. In that case she sees her husband as a stumbling block to her having fun, so she decides to Walk-Away.

2. Military Or Forceful Divorce: a situation where by the man forcefully eject the woman from his house. He doesn’t need the consent of any court of law to do that, he just throw her things outside and that’s all.
CAUSES:

>This is the exact opposite of the first one I mentioned but the only unique feature of this form of divorce is that it could be due to
> Barrenness: the woman had no child after so many years of marriage.
>Male-Child-Syndrome: she didn’t give birth to a male Child.

3. Family Divorce: the family of the man unilaterally agree to send the woman parking or the family of the woman comes to pickup their daughter and never to let her return.
CAUSES:
> Bad character: the woman probably started playing a strange or funny character after the wedding that is not in line with their family believes or standards.
> Stealing: if she’s caught stealing then she must go, that’s the way it is in some family and in the case that the man is discovered to be a thief or arm robber, the family can come for their daughter.
> Adultery: she’s probably creeping and sleeping around with other men and she got finally caught.
> Barrenness/Impotent: the lady couldn’t give them a Child after many years in marriage and the husband couldn’t muster enough courage to send her packing, so the family comes in to play the role for him, most times with his full support. and if its ascertain that the man is impotent the ladies family can come for her also.

4. Lineage/Blood Inspired Divorce: this type of divorce usually occur when a man/lady mistakenly gets married to someone that has got blood connection or relationship with him or her. Once this is discovered (its usually discovered by the elders) the marriage contract must be terminated to save the family involved from eminent danger (wrath of the gods)

5. Village or Community Divorce: This happens to a Bad or Evil Woman. If the woman is discovered to be involved in witchcraft or other forms of evil act and the family she’s married to cannot send her packing or she has succeeded in bewitching all of them, then the community heads will meet and fashion out a way of sending her into exile. Such woman and her children will be ask to leave the community and never to return. What happens is that women will gather with a broom on everybodys hand to sweep her evil footsteps away from their land. Such a woman and her children (if she has any) will never step back into that village anymore, am sure you often see things like that on African Magic

6. Traditional Divorce: this is a traditionally granted divorce. In this form of divorce any of the couple can institute a case before the council of elders/chiefs, the council will hear both parties, look deeply into It and pronounce a judgement. In the case that it’s the woman that has decided to go; her family will be compelled to return the Bride Price to the man, but if she has given the man a male Child she may not need to issue a refund coz the Child(ren) belongs to the man.
CAUSES: anything mentioned above can be the cause but the difference here is that the divorce is granted traditionally by the village’s council of Chiefs/elders.

7. Legal/Court Facilitated Divorce: this is the one you are very familiar with, it’s also done here in African but its usually dont by the elites and the educated few. The irony of it all is that even some of the elite are also involved in the afore mentioned Forms Of Divorce.Am sure I have been able to educate you a bit about the Forms of Divorce in Africa Especially in Nigeria. so go ahead and share it with your friends and family. And if you are planning to marry an african man, you should be aware of all these before taking further steps.

3 thoughts on “7 Basic Forms Of Divorce In Africa.”